Hands of Christ, Inc. SM is a validated ministry of Charleston Atlantic Presbytery (CAP) and is a 501(c)(3) charitable organization incorporated in the state of South Carolina. You may view on-line the following annual reports: 2015  2016

There perhaps is no greater satisfaction than seeing the beaming smile of a child with the anticipation of the adventure of school. During the first three weeks of each August since 2003, volunteers of Charleston area Presbyterian churches distributed school uniforms and school supplies to school children in grades K-8 in need.

The program, founded by the Rev. Dr. Tammy Gregory Brown,  is modeled after Manos de Cristo of Austin, Texas. The partnership was started in 2002 by the Zion-Olivet and Westminster Presbyterian Churches, when travelers to Austin spent three days observing and working with their Back-To-School Program. This trip was supported by a bequest from the estate of Blanche Kilpatrick. With the help of a Thank Offering grant from the Presbyterian Women, the first distribution was held in Charleston in the Summer of 2003 with both congregations hosting distribution days.  Jim Frye became the director of operations and Jim Deavor chaired the steering committee.

First (Scots) Presbyterian joined for the 2004 distribution. In 2006, we expanded to our third and fourth distribution sites on Johns and Edisto Islands. We also become incorporated in 2006 and received 501(c)(3) status from the IRS.  Jim Deavor became the chair of the board of directors.

In 2008 the churches on James Island (Harbor View, James Island, and St. James) joined  together for tthe first annual benefit concert held in the sanctuary at James Island Presbyterian Church.  Since then the concert alternates each year between James Island and St. James. Each choir sings a few selections by themselves and there are several numbers performed by a joint choir from all three congregations. Attendees were asked to bring either a monetray donation or a bag of school supplies or uniform parts. A brief message is presented by the Executive Director.  Prior to 2008 a kick-off worship service was held each year that alternated between Westminster, Zion-Olivet, and First (Scots).

In May 2009, our Founder and Executive Director was awarded an honorary doctorate  from Presbyterian College to the Rev. Tammy Gregory Carter for her work with the Hands of Christ.

In 2011 we added two sites: Bethel (Walterboro) and Summerville. On July 23 and 24th we had the honor and privilege of hosting Ruling Elder Cynthia Bohlbach (center in photo with Tammy Gregory Brown and Leslie Williams), Moderator of the 219th General Assembly.   She repeatedly said that one of her best moments as moderator was her visit to see the Hands of Christ in action.   We were saddened by her death on December 12,  2012  following a valiant battle with cancer. 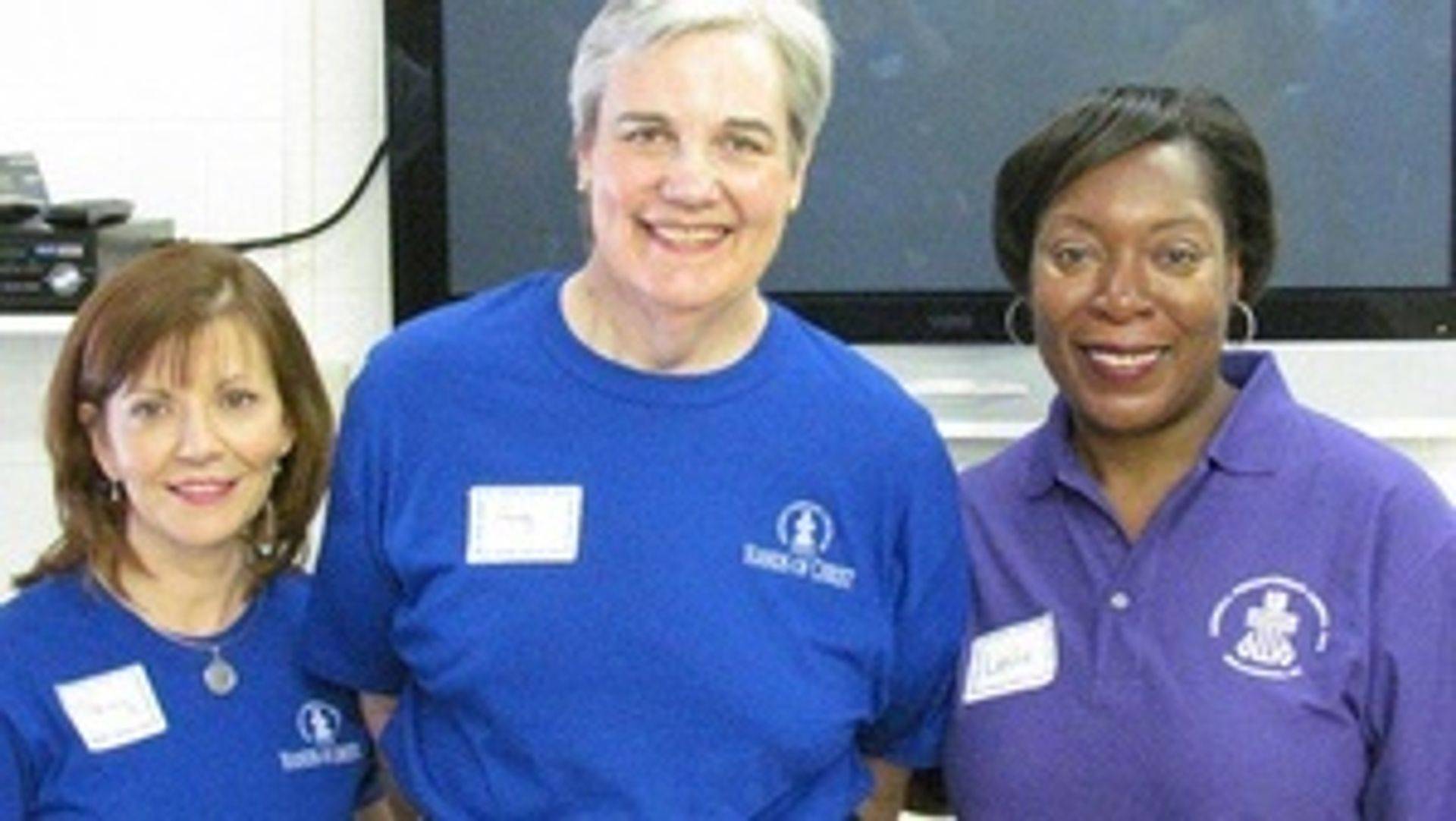 In 2013 James Island Presbyterian Church sponsored our first benefit meal, a Brazilian Brunch that was a lot of fun.

The 2014 Caritas Organization Award was given to Hands of Christ by the Sisters of Charity Foundation of South Carolina honoring Hands of Christ. The Sisters of Charity Foundation of South Carolina hosted their annual Grantee Luncheon on June 19, 2014 at the Hilton Garden Inn, Columbia, South Carolina. The awards given include leadership, caritas individual, caritas organization, alumni, and the strategic grant awards. Each year the Foundation seeks to recognize those individuals who exemplify the Foundation’s mission of charity (caritas) and desire to help families live out of poverty.

The 2014 distribution season was held in memory of Jane Hassell,director emerita, who died in January.  Jane was a ruling elder at First (Scots) Presbyterian Church and helped us mightily in our developmental years.

On July 1, 2014,  Founder and Executive Director the Rev. Dr. Tammy Gregory Brown became the Executive Presbyter and Stated Clerk of North Alabama Presbytery.   In honor of her founding vision and service, she was named executive director emerita. Jim Deavor became the new executive director. Catherine Byrd became chair of the board of directors.  In 2014 we held our first distribution ever at Yeamans Park Presbyterian Church in Hanahan.

In 2015 as the Zion Olivet congregation moved its worship to Rivers Avenue in North Charleston, with the assistance of their pastor, the Rev. Dr. Sidney Davis, a new partnership was developed with Second Presbyterian Church to hold the downtown distribution at Second Presbyterian. This became even more important with the slaying of the nine members of Mother Emmanuel AME Church just around the corner from Second Presbyterian.

In 2016, we held a two-day distribution again at Park Circle in North Charleston although the congregation was disbanded earlier in the year.  This was accomplished with the help from several congregations, but particularly with help from Yeamans Park.  Also, in 2016, while the Zion Olivet/Second Pres partnership was maintained for the downtown distribution, a distribution was held on Zion Olivet's new campus on Rivers Avenue in North Charleston, the facility they share with Advent Lutheran Church (ELCA).  Interactions with other nearby non-presbyterian congregations to our distribution centers have increased over the years, for example, Walterboro, Moncks Corner, Park Circle, Edisto, Zion Olivet, and Westminster.  While we maintain  the first half of our mission statement as the backbone of our organizational structure, the building of ecumenical relations at each distribution site is very much encouraged.

in 2017 we added two congregations in Orangeburg: First Presbyterian and St. Luke with First Pres serving as the distribution site.  On Saturday August 5th at Zion Olivet we served Mone', our 50,000th child. We also topped the 5,000 mark for the first time in a single distribution season, serving 5256 children and since 2003 we have served 52,647 children, one child at at time.

In 2018 we saw a drop in the number of children served.  Whether, it is because of lowered unemployment, competing school supply programs, gentrification, schools dropping mandatory uniform requirements. or some other factors, we are not sure.  We still served 3936 children.  Out 16 year total came to 56,581.  The Rev. Dr.Joe Brooks and Dr. Walter Ector both entered the church triumohant.

Zy'ion became the 60,000th child that we have served since our inception.  This occurred at Second Presbyterian Church.  Myrtle Hart of Zion Olivet entered the Church Triumphant.

The six "Great Ends of the church" from the Book of Order of the Presbyterian Church (U.S.A.) are: